Last weekend Joe, Mia and I went to Boston for a fun family weekend with our main purpose being to cheer our friends, Sally, Sheila, Pia and Sue, on in the marathon on Monday.  Our trip got off to a bad start when 15 minutes after getting on the highway my car broke down.  It was nothing major but serious enough that we had to have it towed to a shop to be fixed.  At this point, several hours after our planned departure, I asked Joe if he would rather just stay home.  He said no way, that we were still going to have a fun weekend.  So we got in Joe's car and headed to Boston.  Even though we got there later than planned we had a great afternoon and evening. 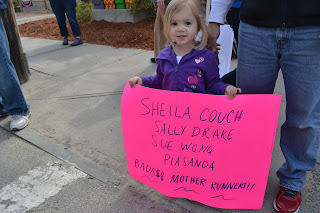 It wasn't the day they hoped for but we are so proud of them!


On Marathon Monday we woke up early and met up with my friend Jenny and her husband Bill and headed out to spectate.  Jenny has both run and spectated before so she suggested we drive to Newton and take the T into the city from the Riverside Station.  This would put us on a T line along the marathon route and make it easy for us to get back on the highway to head home after the marathon.  We decided we would get off at the first stop and spectate around mile 17 for a while.  We ended  up getting there around 10 a.m. so we were able to get a great spot right in front of the hospital.  Mia was super excited, she had her horn, cowbells and signs we made earlier in the week ready to go.  We got to see the hand cyclists come through, military service members that walked the course and then the elites.  It was so amazing to see some of my running idols like Kara Goucher and Shalene Flanagan run right by me.  The elite men were also amazing- so fast! 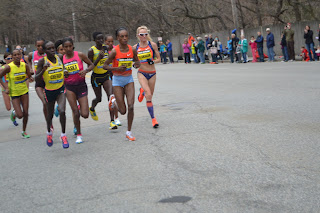 
After the elites passed us more and more runners started coming by.  We spotted some really fast runners from Albany that are members of The Willow Street Running Club and Team Utopia.  We spotted our super fast friend Sally who looked really strong.  We had so much fun cheering.  We loved how the runners seemed so happy when we would call out Thieu number or names from their shirt. We kept looking at the tracking information for our runners on the phone and finally decided that if we wanted to see everyone finished we should jump back on the train and head towards the finish.

On the train we discussed our options.  We could get off at the 25.2 mile maker, the 25.5 mark or the 26 mile mark.  This is where the what ifs begin for me.  We decided to get off at 25.2 figuring that we would walk from there towards the finish until we found a good spot to watch our friends come in.  When we got off the train we were right next to the course and it was packed.  We thought we would never find a spot.  As luck would have it we found a great spot right away right in Kenmore Square.  It was perfect we were right next to the course but we also had a little park right behind us where Mia could run around a bit. 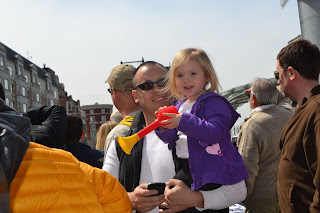 Soon after we arrived Sally came through looking fast.  She would end up finishing with PR and qualifying again for next year despite having some troubles throughout the race.  As we were watching we ran into another group of spectators from Albany that we knew so we had fun cheering for their friends as well.  Soon we saw that Sheila should be coming through but it seemed to be taking her longer than we thought it should so we worried that either we missed her or she was hurt.  Not long after we expected Sheila Sue came through.  We could tell she was tired but she was still going strong.  Still no Sheila and the tracker was not showing her as finished yet so we thought maybe we hadn't missed her and that something was wrong that was making her take longer.  A few minutes later Pia came through.  She looked like she was having so much fun.  At this point we weren't sure if we should head to the finish or wait to see if we would see Sheila.  The tracker still hadn't shown her as finished so we didn't think we missed her but we weren't sure.  Pia's family was near the finish and had texted Jenny saying that we should head down there to see them and Pia when she came through.  We didn't go at that point because we wanted to make sure we hadn't missed Sheila.  We would later find out that we missed Sheila somehow, that she came through before Sue.  In a way missing her turned out to be a blessing because we waited at mile 25.2 rather than trying to head to the finish. 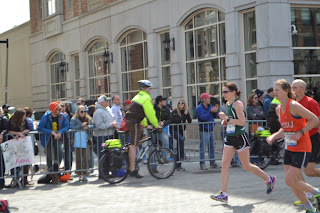 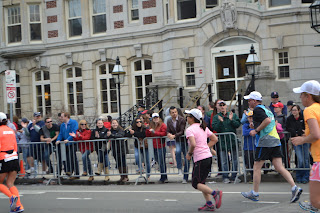 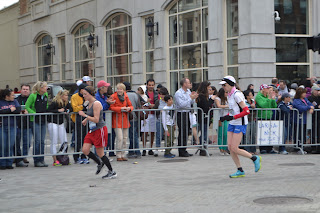 
Not long after Pia passed we heard two loud noises, which we later would find out where the bombs.  At first we didn't think anything of it as we were so focused on cheering and trying to spot Sheila.  Then suddenly everything seemed to happen at once.  Police sirens started sounding and cop cars started rushing in from all directions.  Then several cops ran past us jumped the barricade and ran across the course pushing people out of their way as they went.  Helicopters were suddenly overhead.  We realized something major was happening but still the idea that a terrorist attack was taking place never occurred to us.  Joe walked over to an officer standing a few yards from us who told him there was an accident and that the trains were shut down.  We decided that we had better head out then and try to find a taxi right away or else we would be stuck in Boston for a while.  As we were walking away from the course we started hearing people yelling about bombs.  Our phones also started beeping like crazy with texts asking if we were ok.  It felt like everything was happening at once.  We realized we needed to get out of there so we kept walking towards the street still thinking we needed to find a taxi and not really understanding what was going.  Joe tried to call my dad to find out what was going on but we could not get any service.  None of our phones would work.  I think that was the point we realized this was real and something bad was happening.  More people were running down the street and saying that bombs had gone off.  Empty taxis were driving by and not stopping.  All of the sudden I was in the street with Mia in my arms waving at a guy driving a mini-van.  He pulled over and I asked him if he could get us out of here.  He asked where we were going and I told him Riverside Station but that we would go anywhere he was heading as long as it was out of the city.  He told us to hop in.  It's funny I don't really remember even thinking about doing any of this, it seemed like instinct just kicked in and I was determined to get Mia as far away from there as fast as I could.  Jenny later told me she thought I was a little crazy when I ordered her, Bill,  and Joe to get in the car with a stranger.

It turns out our driver Bill was actually there supporting a runner who had finished earlier.  His runner had jumped on the train earlier to head to the airport.  At this point we still didn't know what exactly was happening and we worried with him that his runner was safe.  As we were driving we explained to Bill where our car was and we figured out that Riverside Station wasn't far from where his daughter lives which is where he was heading.  We still were not able to get a cell signal but Joe discovered that the Internet on his phone was working.  He saw a report about bombs at the finish line of the marathon.  He also realized we could log in to facebook so he had me post a message that we were safe and on our way out of the city in the hopes that our family would see it and not worry so much.  As we were driving we kept trying our cells, we were so worried about Sally, Sue, Sheila and Pia and hated that we didn't know where they were or where their families were.  On one hand I wanted to get Mia away from any danger but I felt so guilty leaving not knowing where they were.

Once we got to Riverside and got in our cars we started driving towards home.  Finally were were able to call out and get in touch with our families and find out more of what was going on.  When we heard we knew we made the right call in getting out as quickly as possible but we were still worried about our friends.

As we drove towards home we saw a constant stream of police heading into Boston.  The only cars heading towards Boston were police and other emergency vehicles.  It was very surreal.

During the ride home we started getting info on our friends. Sally had finished and found her brother and got out of the city soon after the bombs went off.  Sheila was heading towards the finish when the bombs went off and ran the other way.  Her hearing was initially affected but she had no permanent damage.  Sue and Pia didn't get to finish either but were both safe.  Pia's family was about 50 yards from the 2nd bomb and had a pretty scary experience but luckily were safe and unharmed.  Sue found her family but was stuck in Boston and ended up having to walk 3 miles to get out and to her car in Cambridge.  Everyone from our area that ran made it out unharmed.

Mia doesn't understand what went on and luckily just thinks that the train was broken and that's why we got a ride with the nice man, as she calls him.  I am grateful for that, she is too young to try to understand evil.  I can't even understand it.

We were all so lucky and I am grateful for that but it still has been a tough week.  It's hard not to think of all the what ifs .  When we heard about the 8 year old boy that was killed it broke my heart.

I want Mia to not be afraid of the world.  I want her to have a sense of adventure and to have as many experiences as possible, but this has really changed me.  I hope in time it will get easier and I know that I have to get past it or else those evil men win.  In the meantime I will keep praying for the families of the three people that were killed and pray for those that are injured.

Before the bombs went off we were having such a fun weekend.  The spirit of spectators and the runners was so inspiring.  It's hard to comprehend that one of the best days could turn our to be the worst day.  I'm more determined than ever to get to Boston someday.  I don't know if I will get there next year but if not I will be there to cheer on my friends and show the bad guys they don't get to win.
Posted by Melissa at 7:00 PM